Must go and try “Hamamoto Coffee” on your way back from Himeji Castle!

Himeji-City, in Hyogo Prefecture is famous for its Himeji Castle. A lot of tourists are visiting to the castle every day.

This time, we are featuring “Hamamoto Coffee”-popular among locals for a long time as a coffee specialty shop, which is located near the caste.

The shop is open from AM 7:00 in the morning, and you can drop by for your breakfast before visiting to Himeji castle, or it’s good choice for your tea time relaxing after sightseeing. 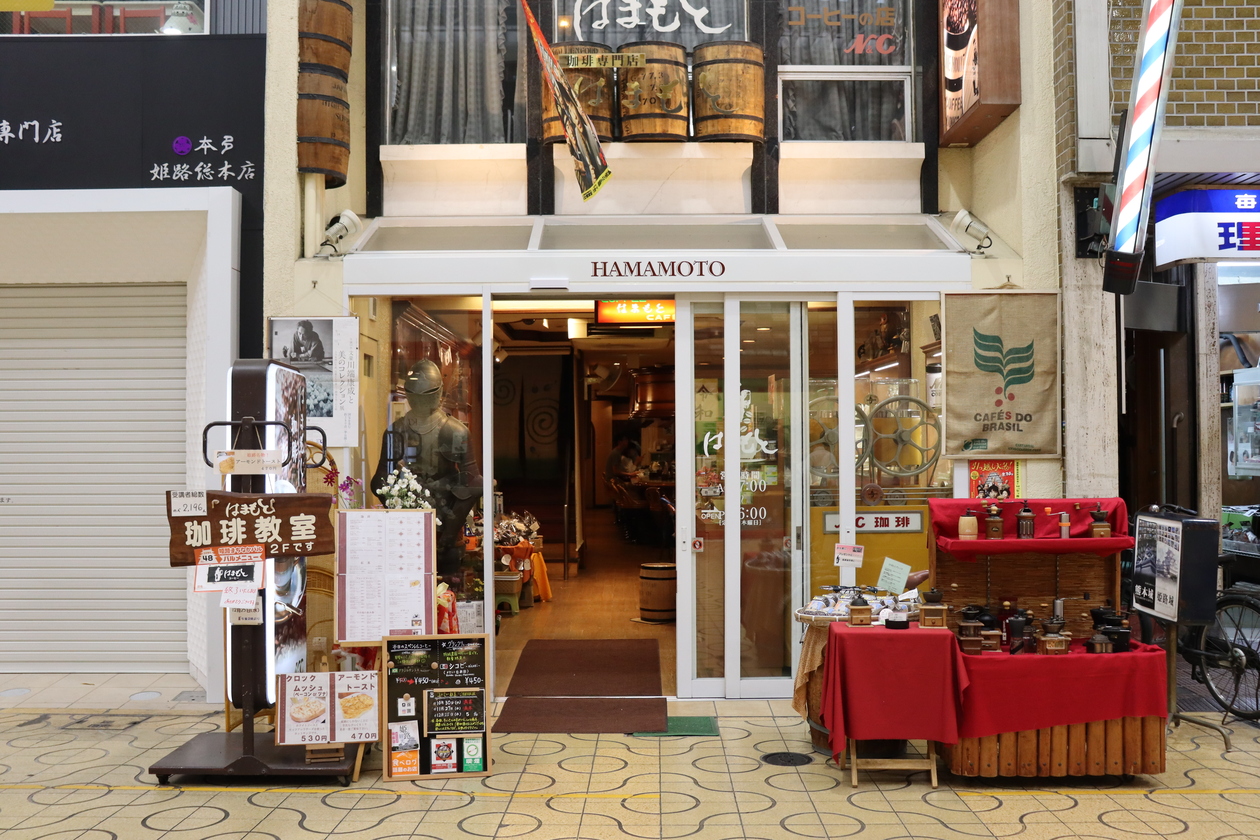 Since it opened in 1975, the coffee shop has been popular among locals and tourists for its “Almond toast” with delicious coffee as the menus are the Himeji local delicacies, which you definitely try it. 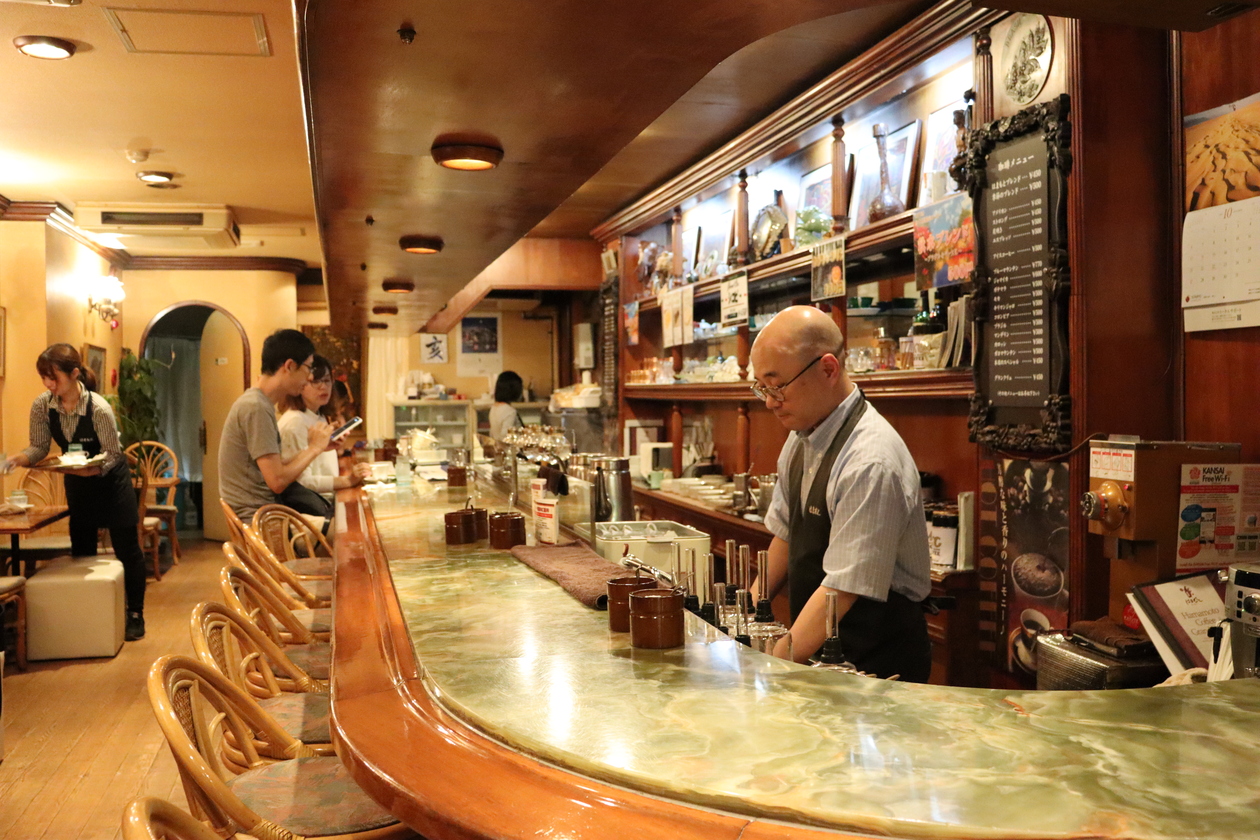 Inside the café, with having atmospheres of nostalgia for Japanese. It’s rather spacious, there are lots of tables& seats, counter-seats for customers of various generations. There are many siphons lining up over the counter.

You won’t be bored watching Coffee liquid being extracted by the drip method one by one. 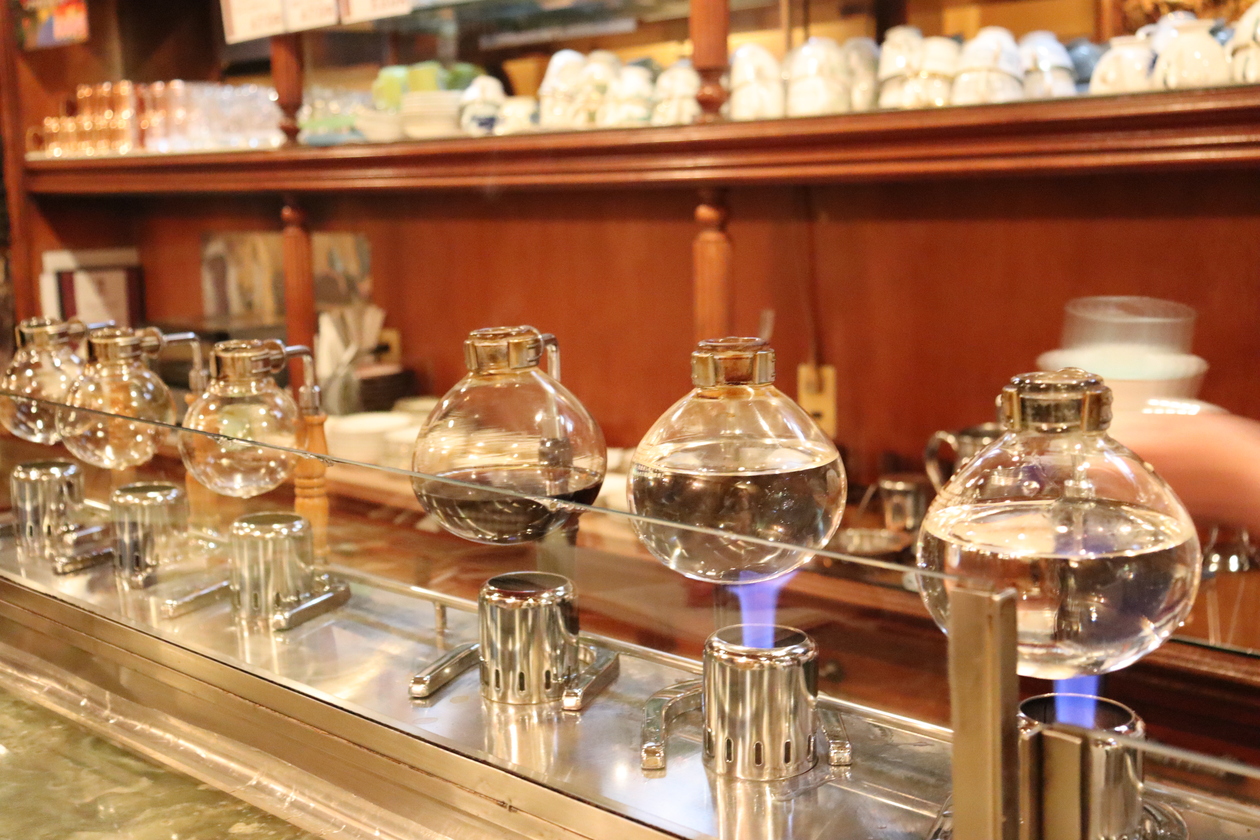 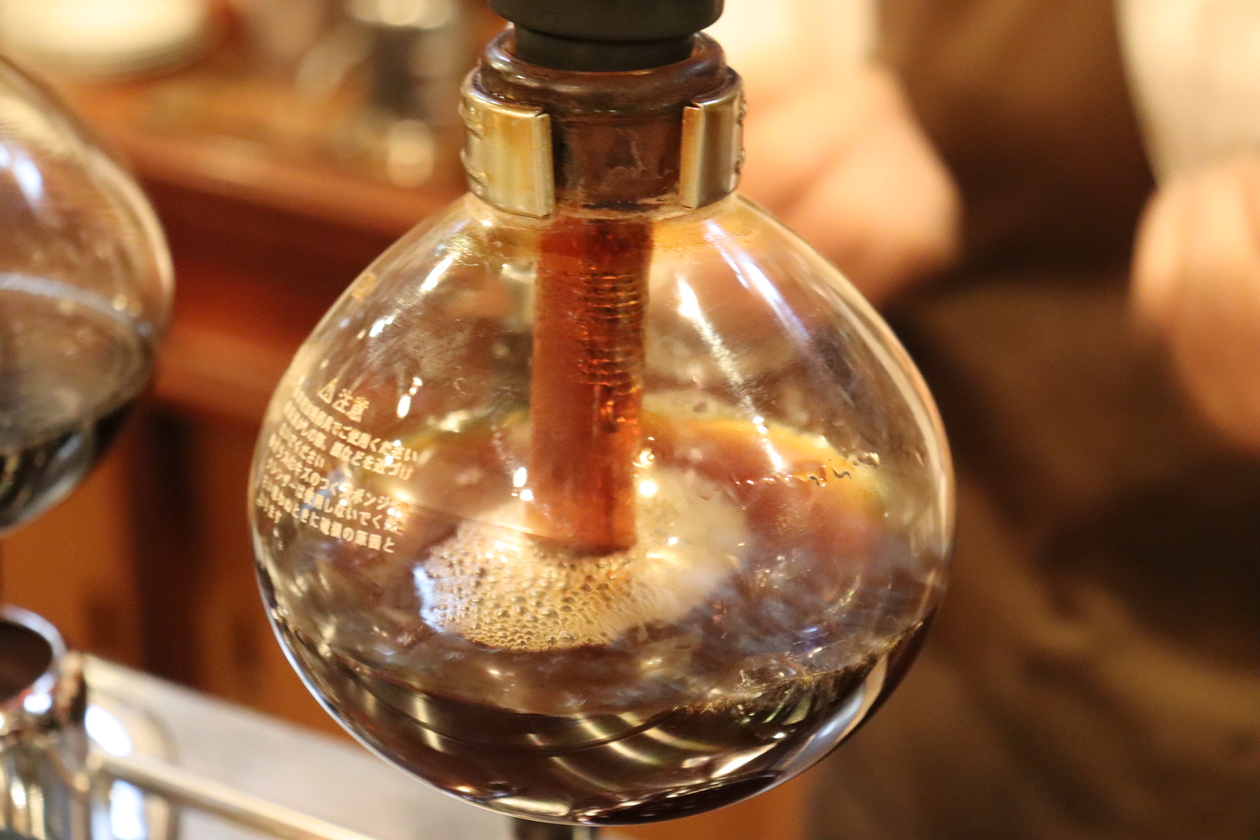 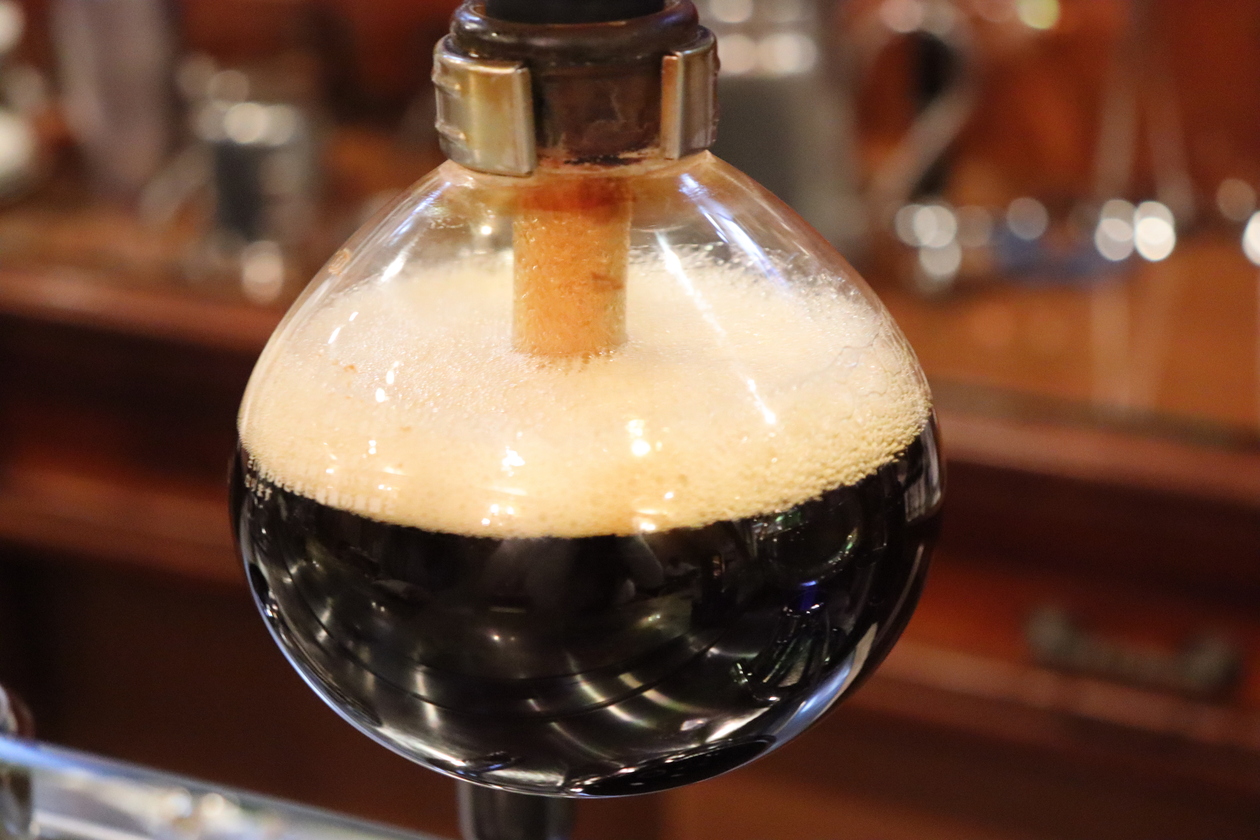 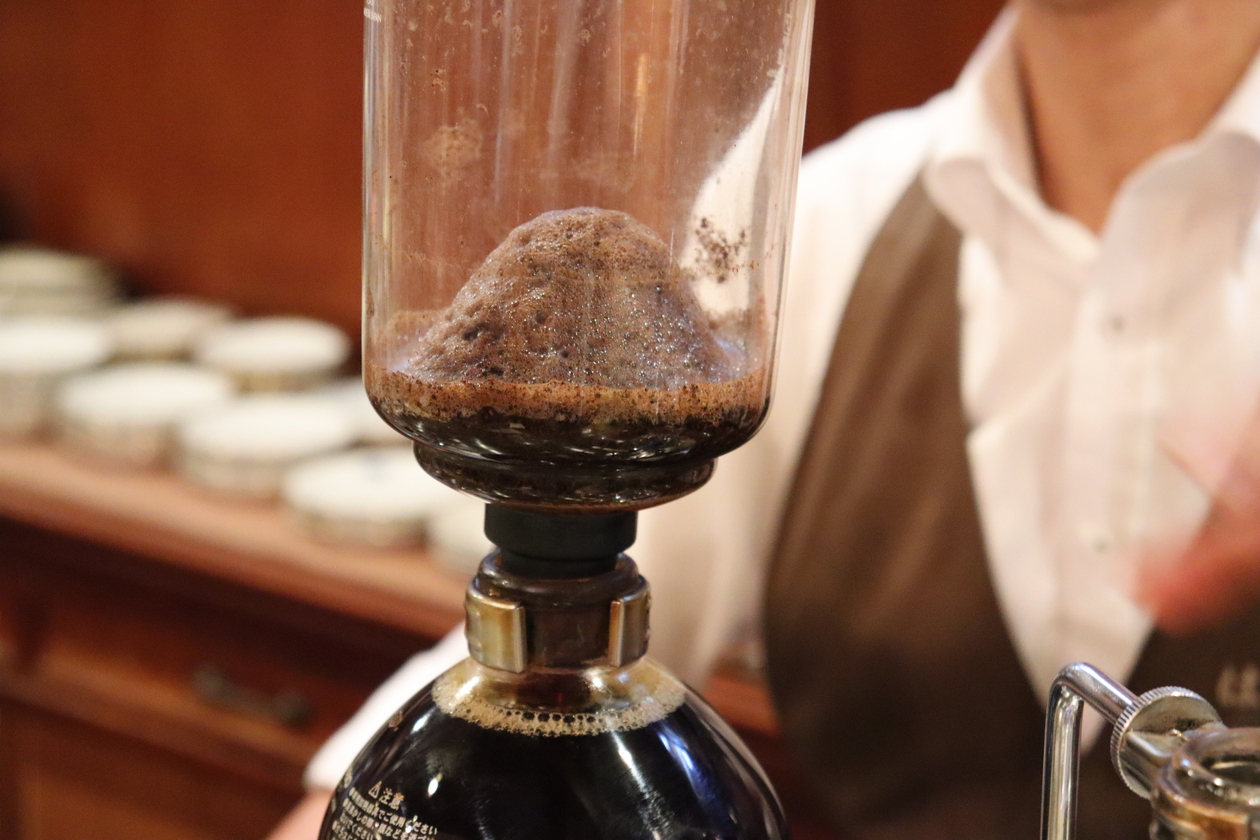 The Siphon Coffee was born in England. In fact, you rarely see it in Europe these days. It seems that siphons are being used in the U.S. and Asia, but only a small number, so have scarcity value. 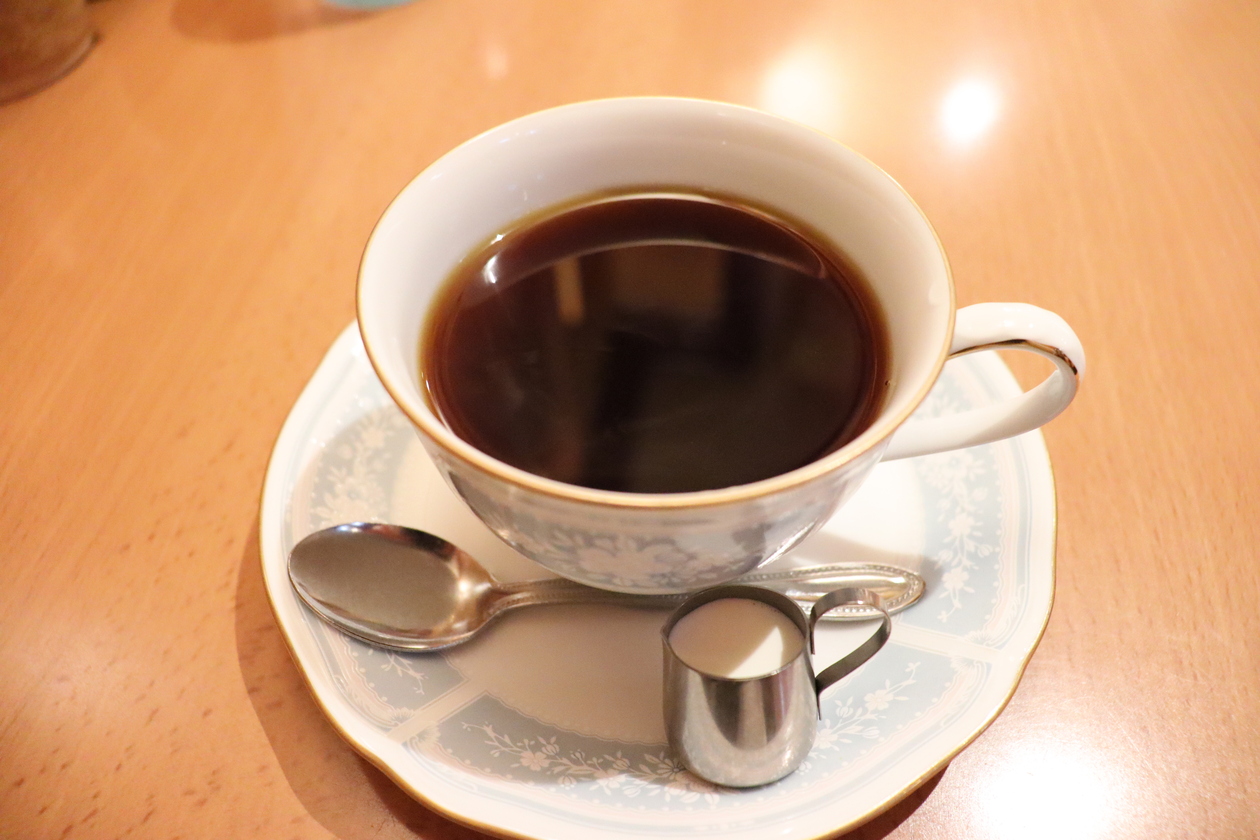 Many people love this blend coffee brewed by siphon for its aroma and mild flavor.

Himeji has a long time “tea drinking culture” and there are a lot of cafes there. Many locals often go to cafe with their families for having breakfast.

Dripped coffees are popular for workers while the siphon coffee has turned to the suite drink in Himeji City.

As the matter of fact, Hamamoto Coffee intentionally changes the temperature of water, for making slight changes of the flavor so that you won’t get weary of their coffee.

Hamamoto Coffee originally started its business as a grocery store and then, turned to the coffee shop. In either business, the freshness is very important.

What we should try with the coffee is the below, 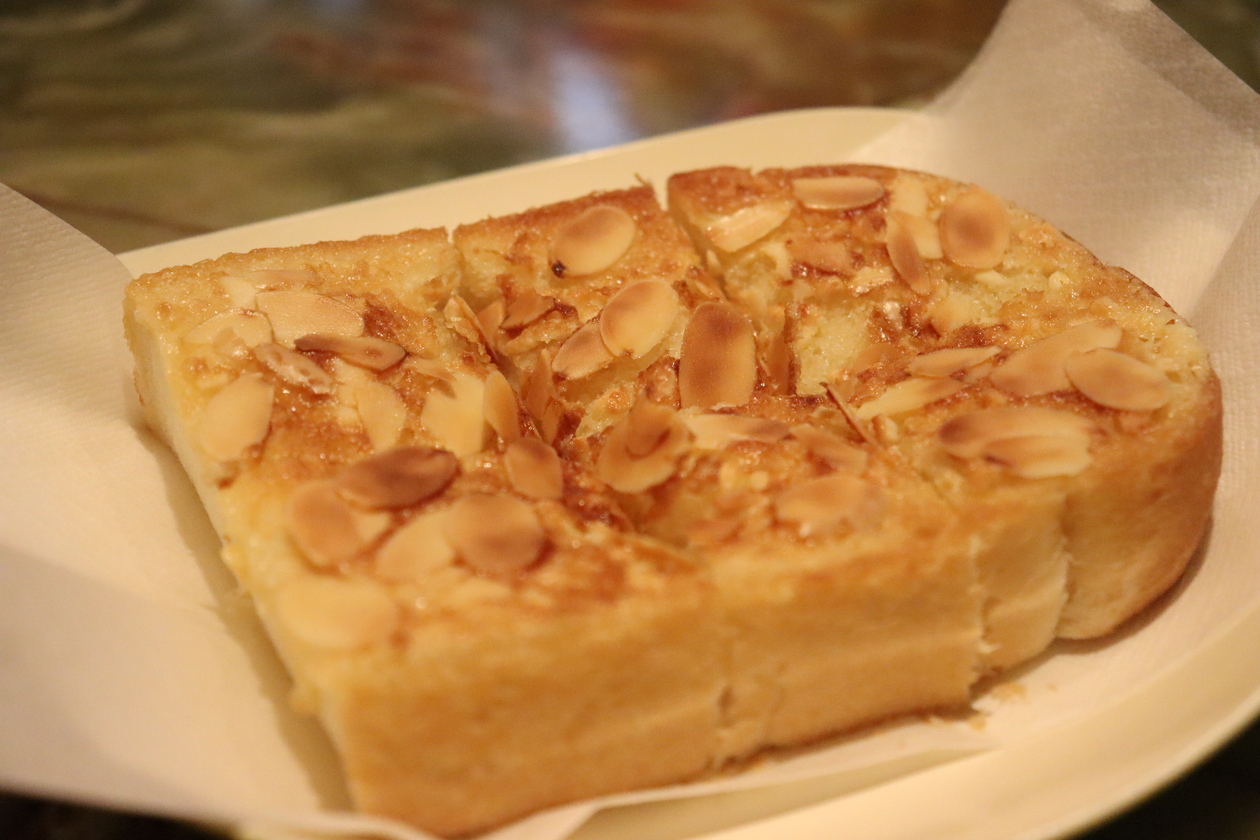 It is slice of springy texture-bread topped with almond butter & pieces of almonds slice
and then toasted. 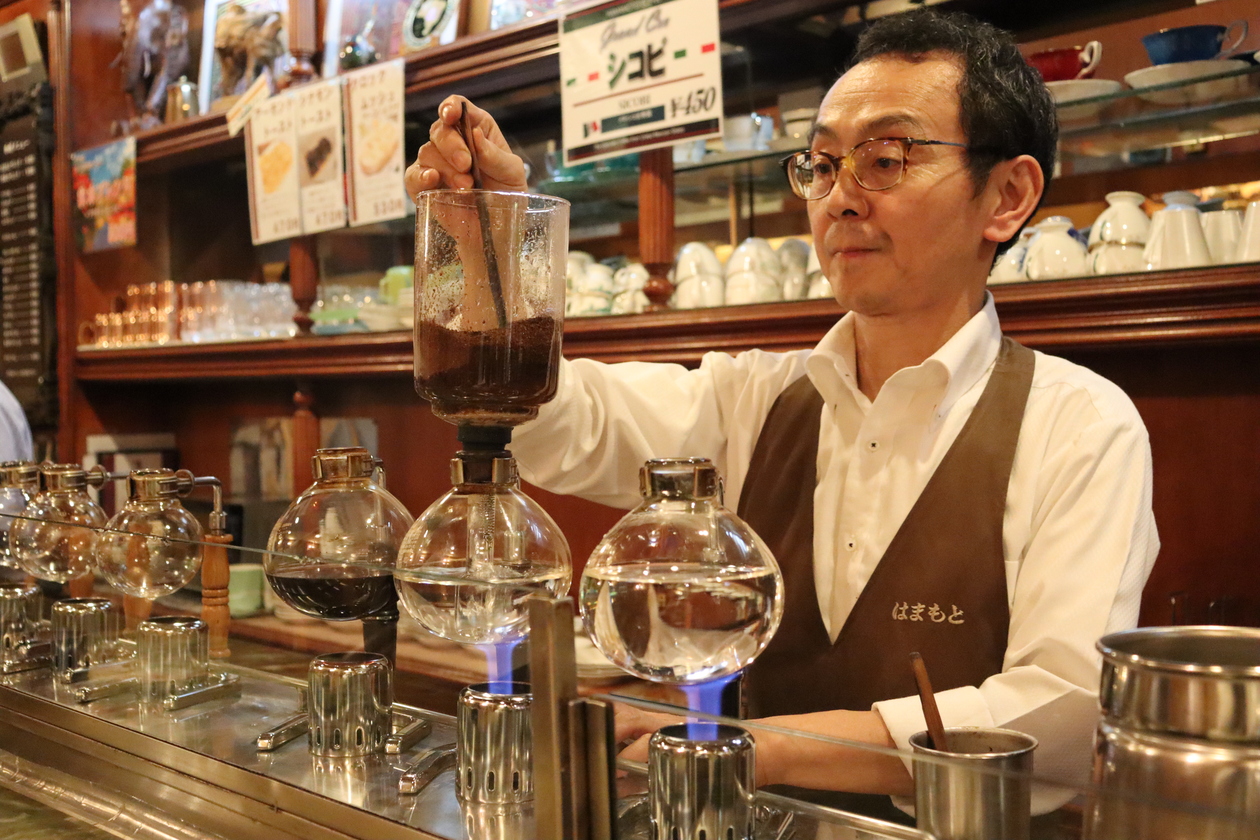 We asked for more about the almond toast to Mr.Hamamoto, owner of the café.

“I guess that many people might have an idea that any café provide almost the same “almond toast”. But actually, the taste of a toast changes depending on breads even if the almond butter is the same.

It’s really important of the harmony of almond butter and bread, and the thickness of a slice of bread. We froze our bread right after being baked in order to keep bread’s moisture. This procedure can make springy texture.

And about the almond butter we are using, it is made only from pure almond poodle, almond dices and almond slices.

Because of its original pursuit, the almond toast tastes particularly good.”

For another special feature, small items, which we can feel very like Japanese are provided to foreign tourists for free. We can tell their hospitality-”OMOTENASHI”. 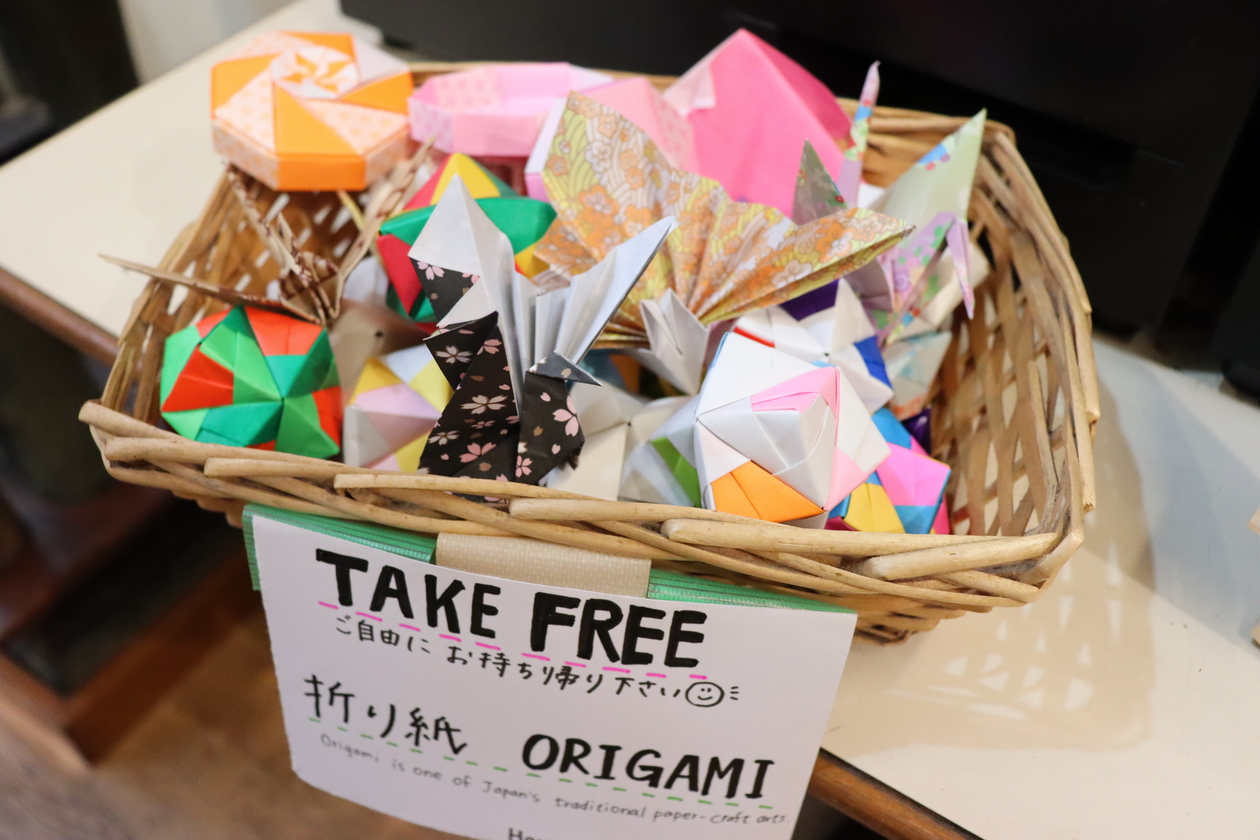 These are made by staff at the café by hand. Most customers from overseas take it for a joy. 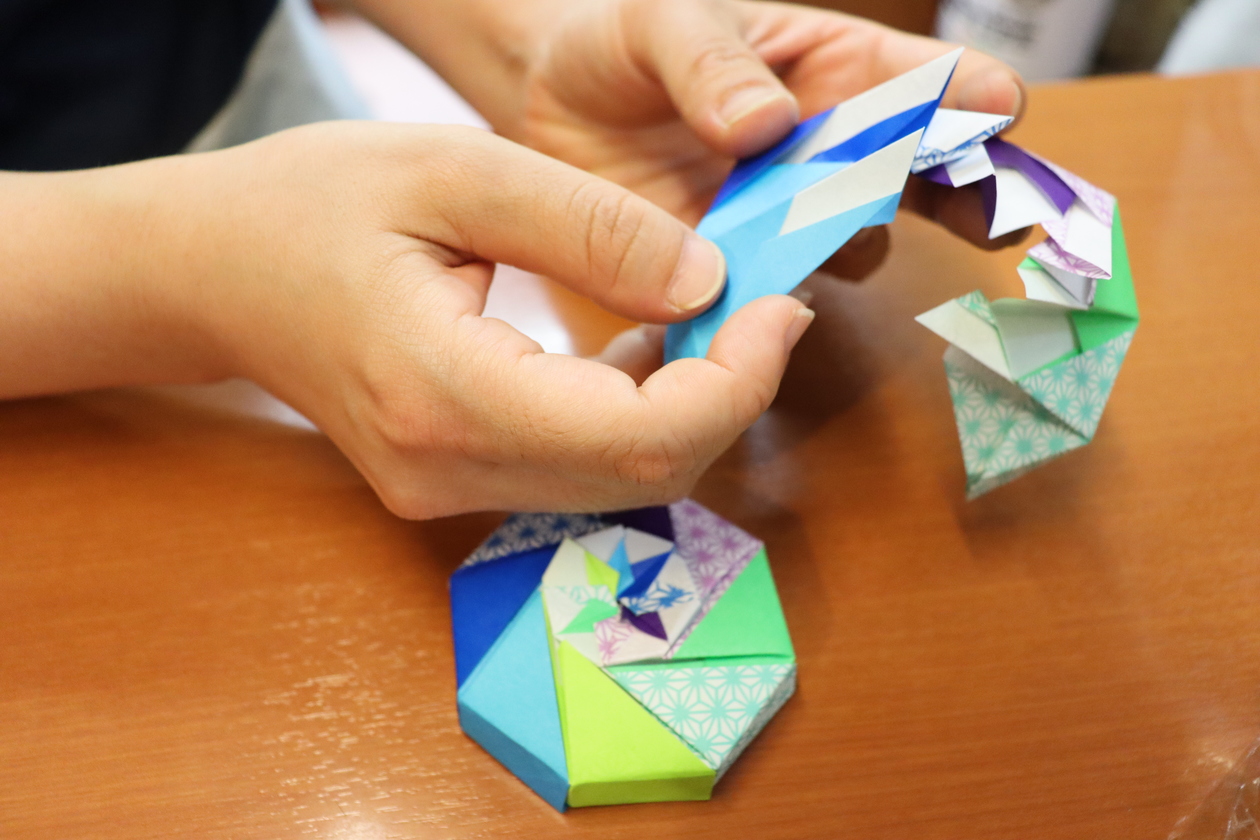 You can purchase the original coffee beans at the entrance, enjoy the café’s taste when going back to home. 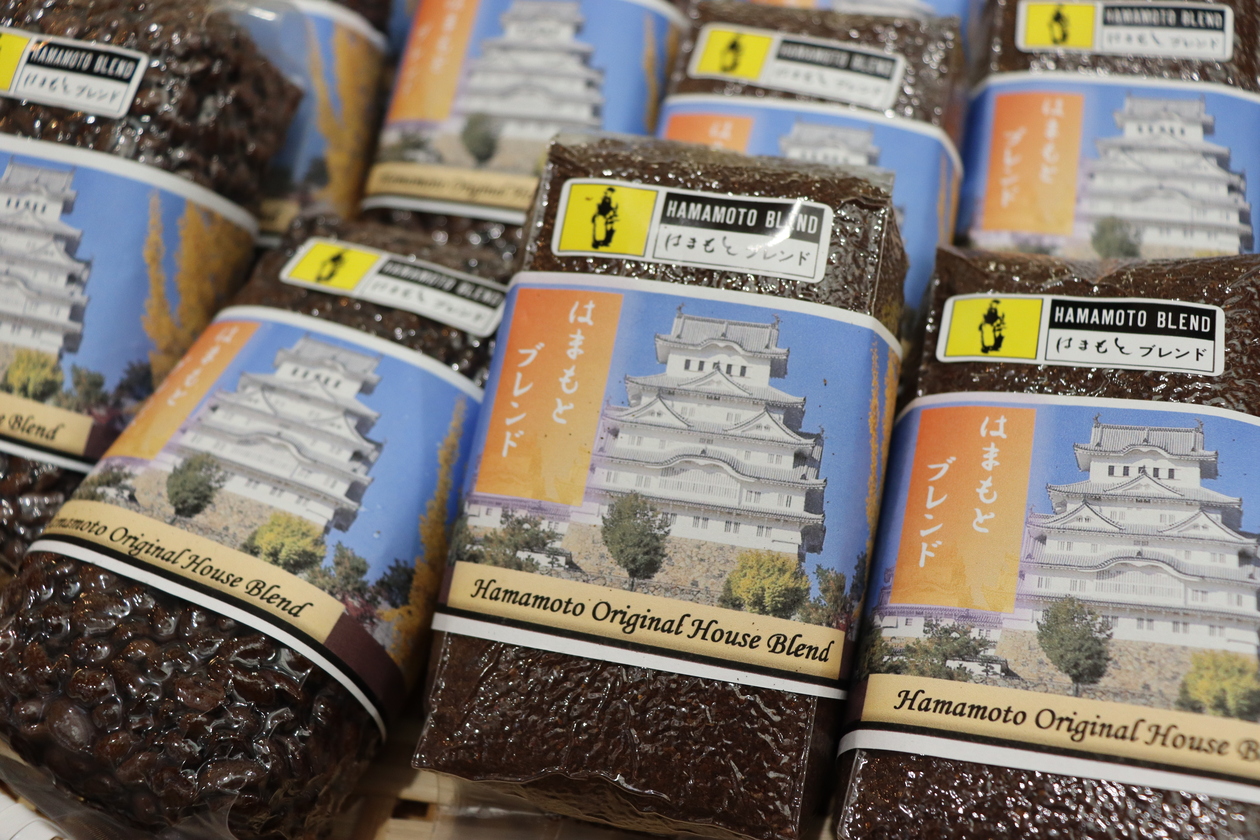 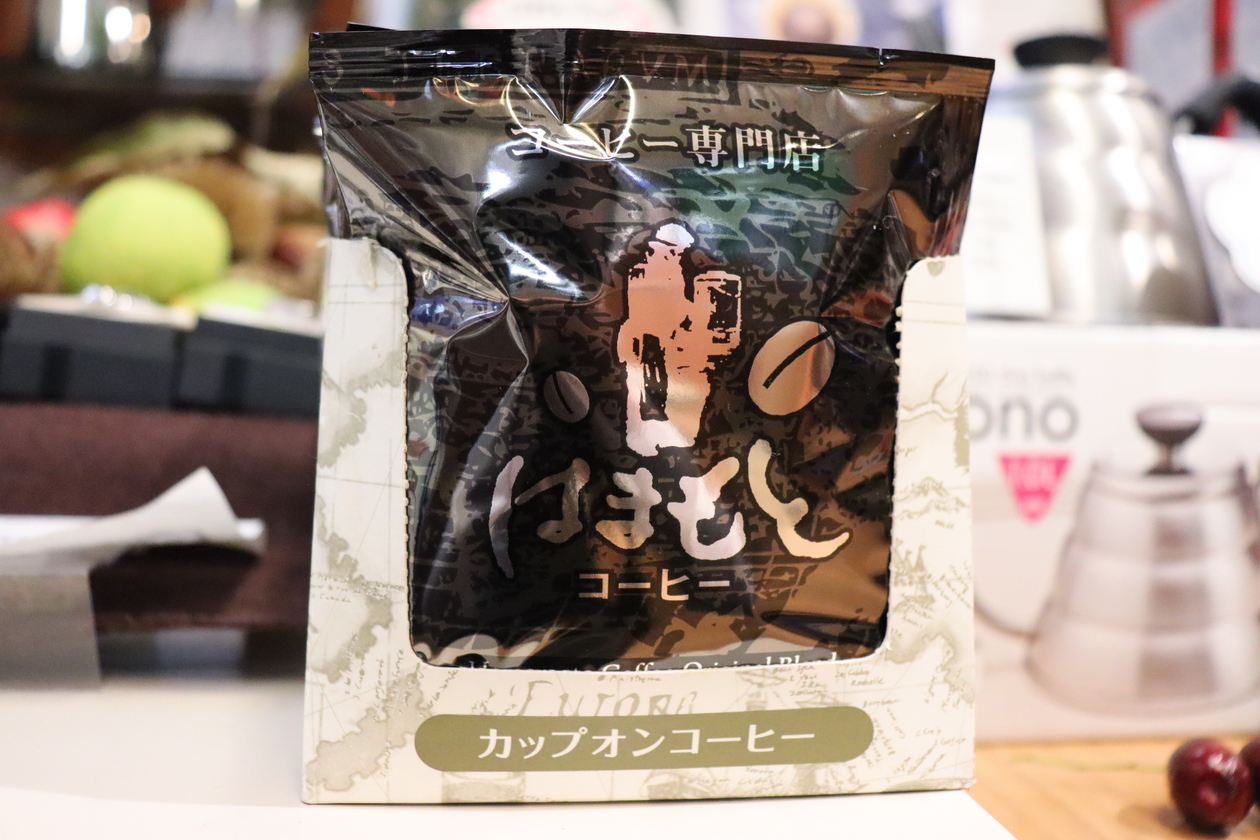 The Almond Toast has a little sweet flavor taste, it’s a good choice for your light meal.

It tastes good as itself, having with some coffee makes it much better. It’s one of the best choices for coffee.

Why don’t you drop by “Hamamoto Coffee” when you have a chance to visit to Himeji?

*The information herein is as of January 2020.

The Origin of Japanese Food is in Nara.

Gourmet trip in Dotonbori, Osaka. Five Gourmet Restaurants you should definitely try and eat around when you go to Dotonbori.

【Osaka】 5 shops recommended by locals at “Kuromon Market,” a treasury of fine food.

Let’s visit Osaka’s famous soba shop listed on Michelin Guide! It is “Naniwa Okina” where you can enjoy both Kanto and Kansai flavored soba dishes.

Summary of delicious Tonkatsu restaurants in Osaka recommended by locals!