【Kobe】This is a must to try while visiting Japan! The originator of teppanyaki “Steak Misono Kobe main store” You’ll find the “genuine” taste of Kobe beef here!

Approximately 20 minutes from Osaka by Special Rapid train, Kobe is a romantic place with a panoramic view of the town and the sea from the mountain, due to its close distance between the sea and mountains. 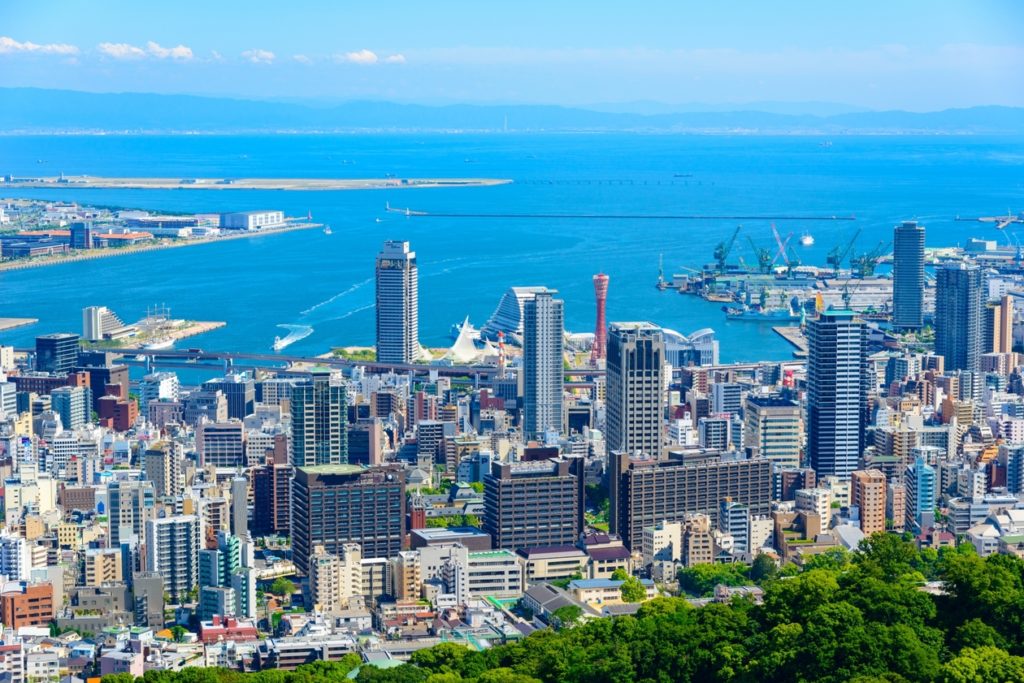 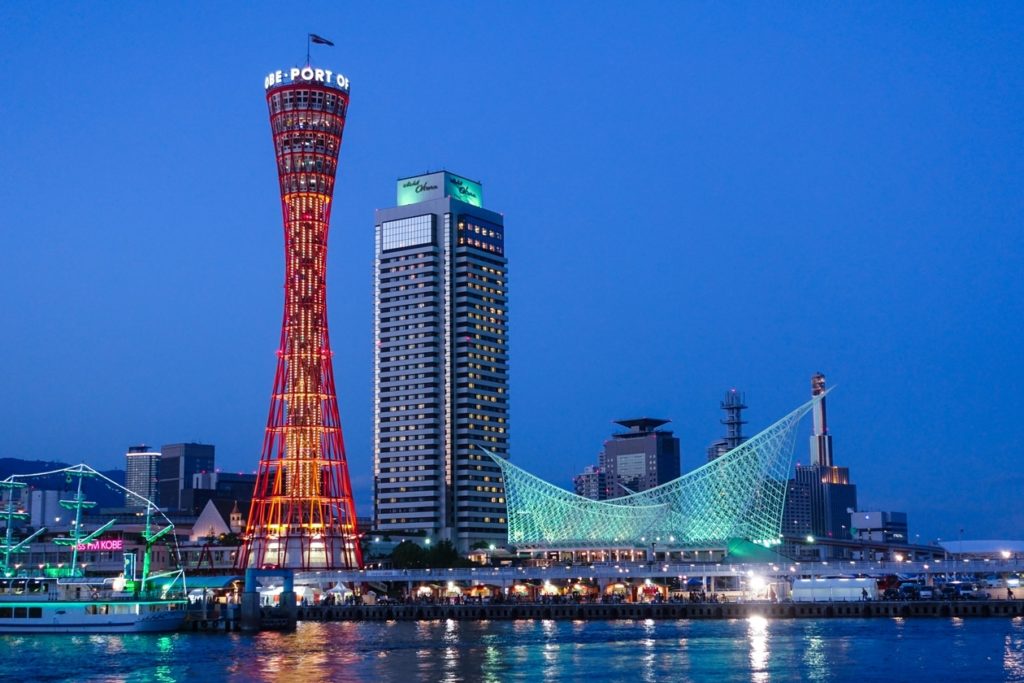 In this city, there is a long established teppanyaki restaurant which has been popular since its establishment in 1945. That name is “The originator of steak MISONO Kobe main store.”

I suppose that most of you have heard the word “teppanyaki”. Not only Japanese but also foreigners recognize the word, and actually, MISONO restaurant was the one started to use this word.

～The start of MISONO～

＜“Mr. FUJIOKA Shigeji, the founder, opened an okonomiyaki restaurant with the iron plate which he got at the shipyard, after being engaged in the coffee shop business and the wholesale of coffee beans in burned down Kobe after the war. It is how MISONO was started. Tajima beef steak he served to occupation army soldiers accompanied by some dancers or their regular customers led to the present MISONO.

Using the flat iron freely in front of the customers, a chef cooks brand beef and vegetables one after another. Their teppanyaki steak Mr. FUJIOKA originated is not only delicious, but also enjoyable like watching a show. Therefore, it became very popular quickly mainly among dancers and soldiers. ＞ 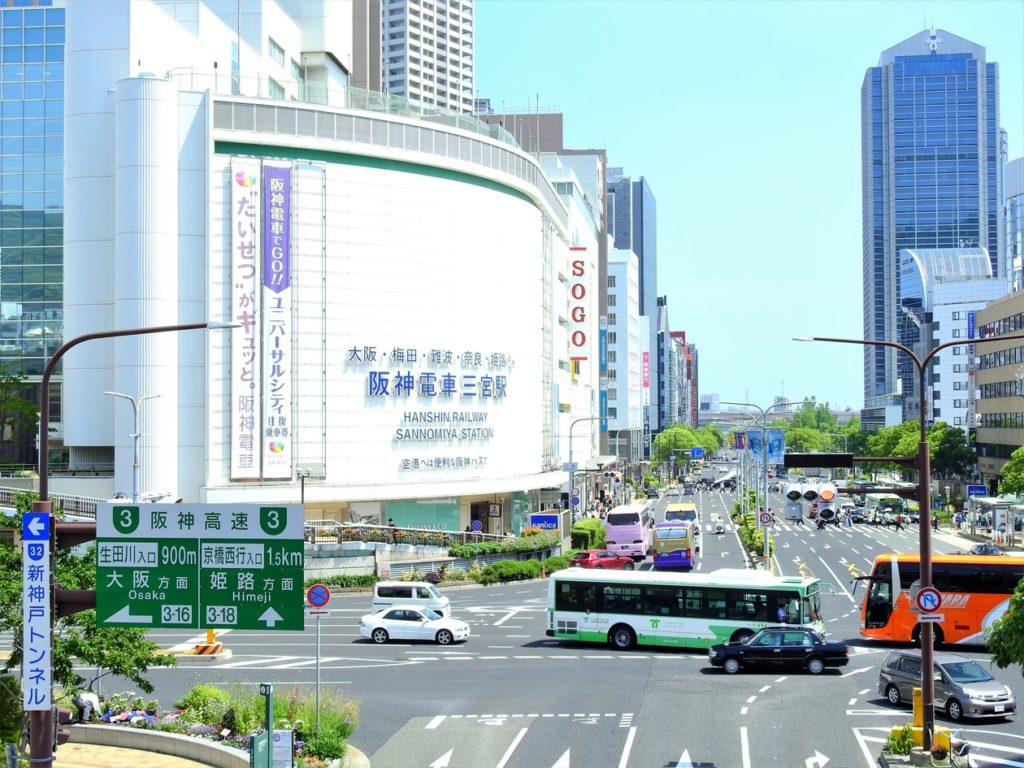 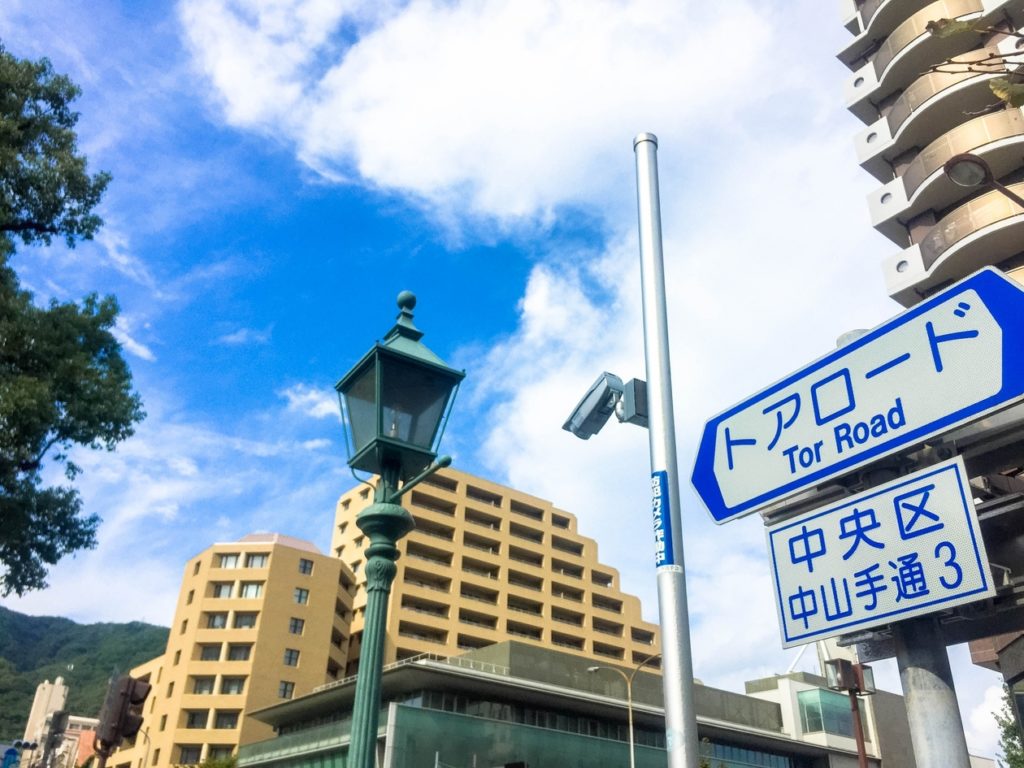 The restaurant is on the 7th and 8th floors of their company building. There you can thoroughly enjoy the meal with a lovely night view of Kobe City. 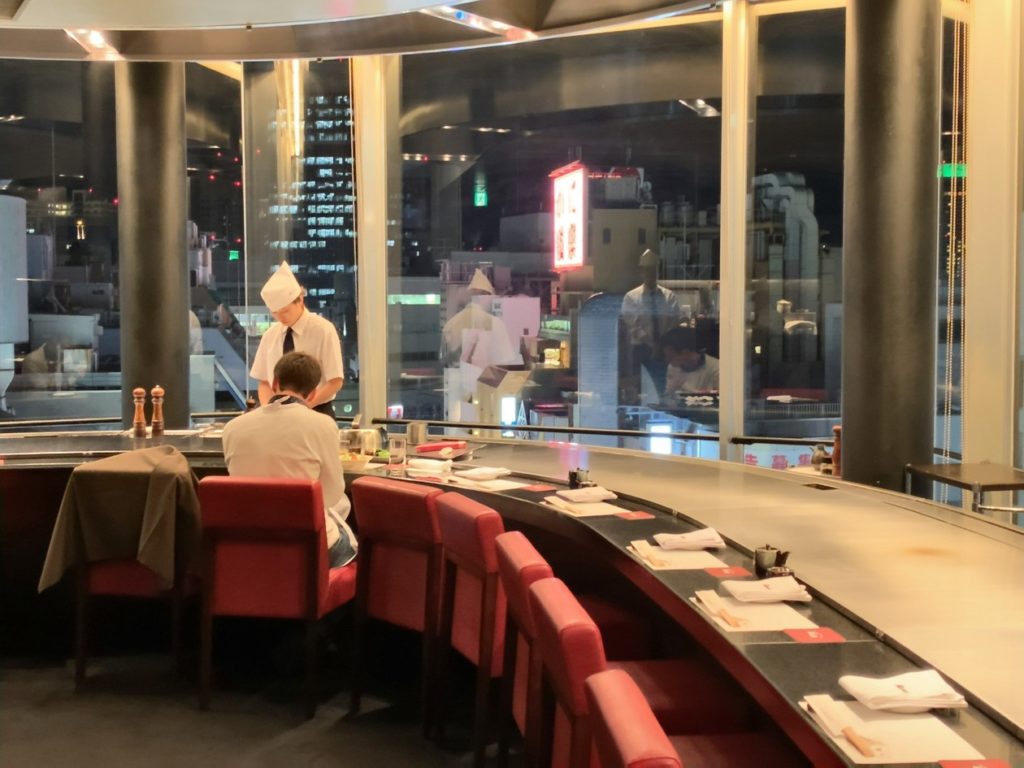 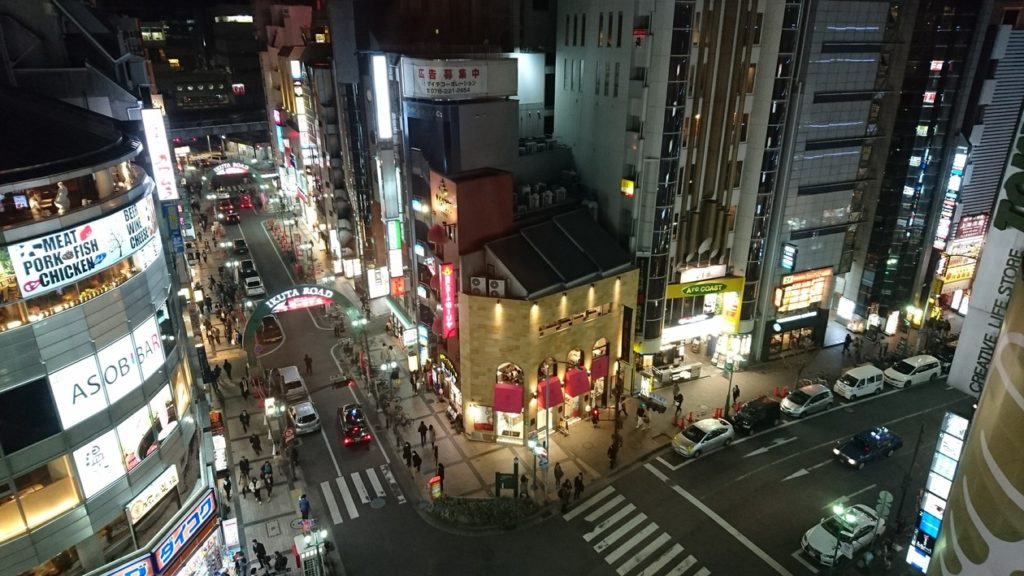 This time I had a meal at the half-moon-shaped table on the 7th floor. 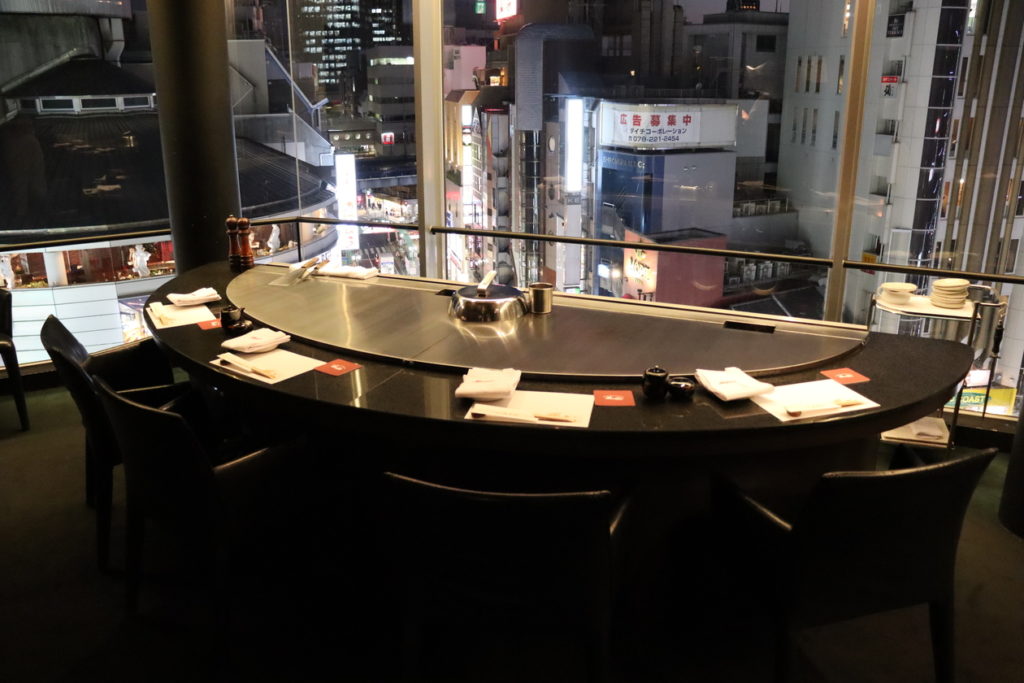 I was fascinated with the great food and atmosphere as there was a beautiful night view of Kobe just behind the chef cooking in front of me. 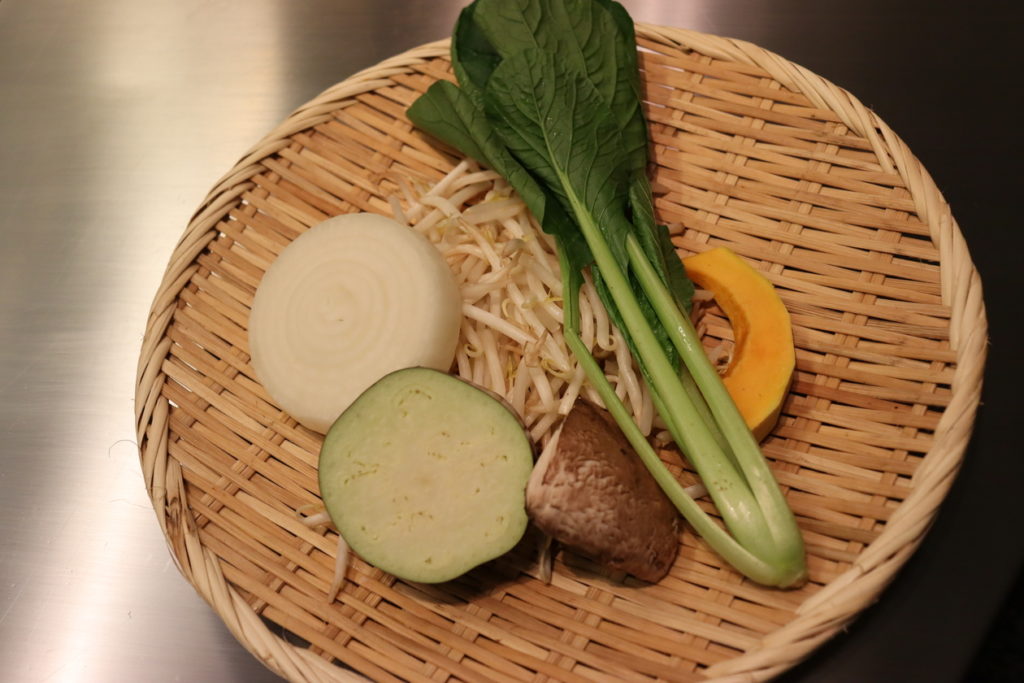 At first, vegetables in season are grilled right in front. 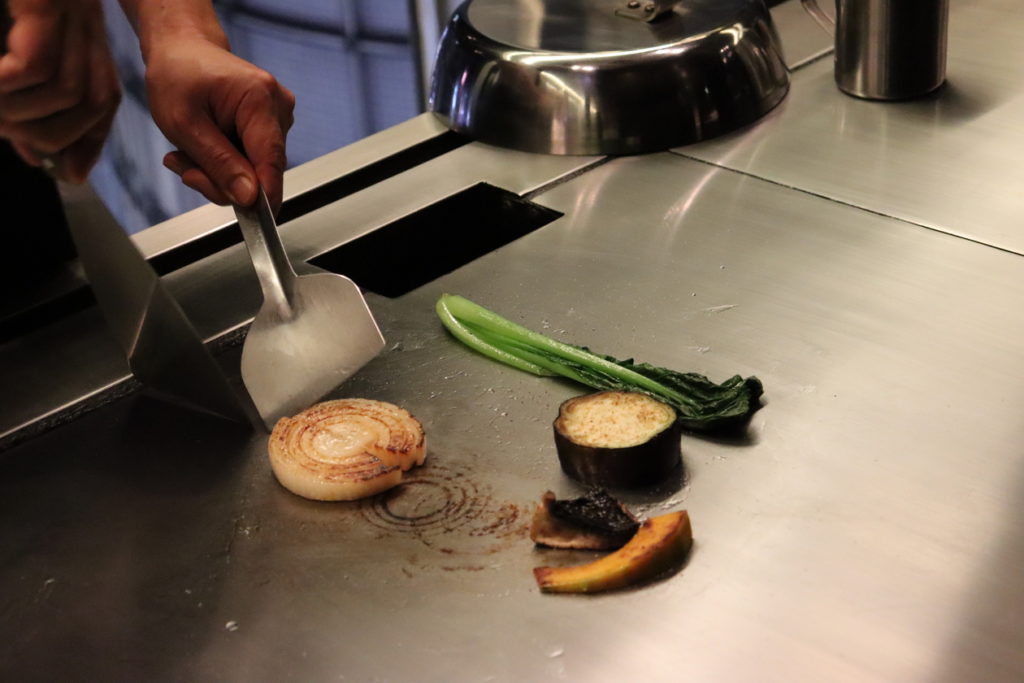 My eyes were caught in the chef, how quickly and carefully he was cooking.

Those vegetables were taken directly from the iron plate and eaten without dishes. 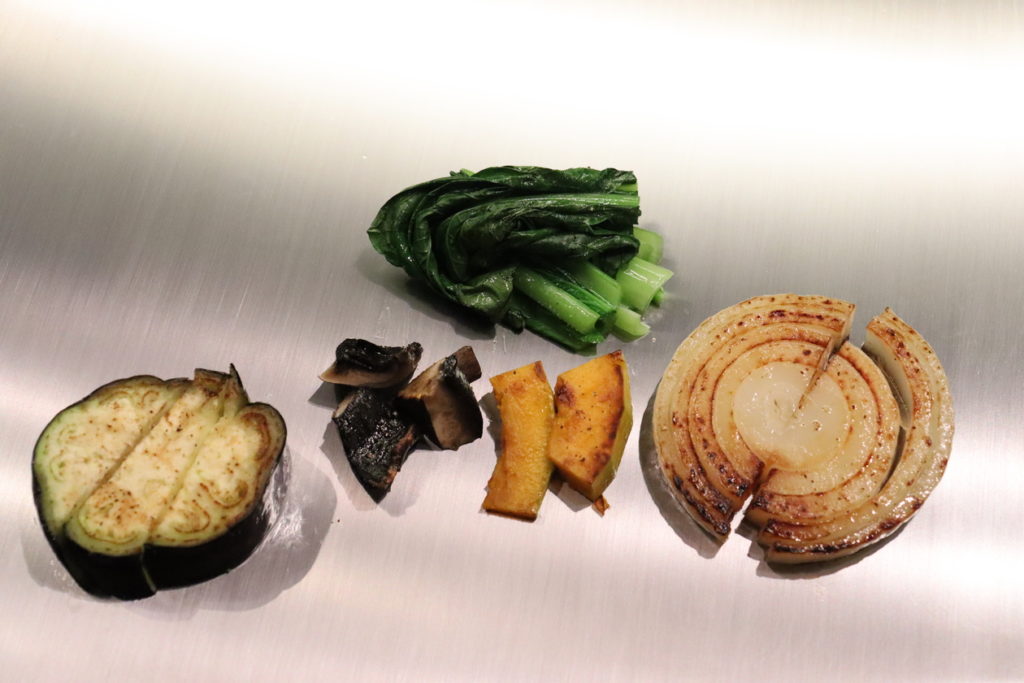 This is also unique and particular to this restaurant. They never use plates for grilled food, but let customers take food from the hot iron plate and eat. For their chefs, an iron plate itself is tableware which connects them to the customers.

Next is the expected Kobe beef. 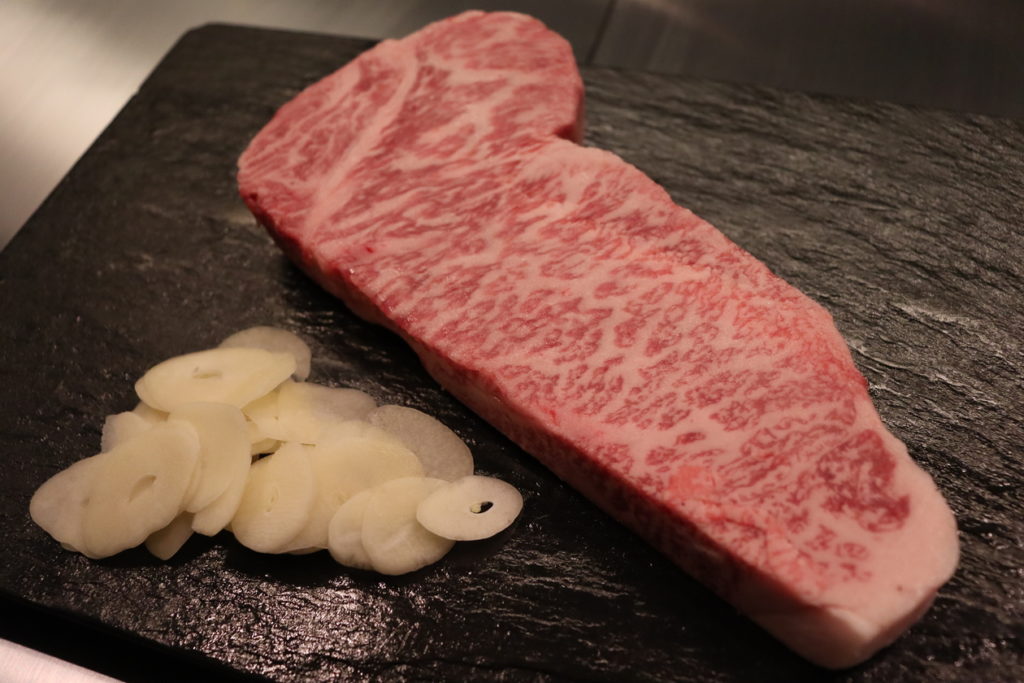 Among Tajima-gyu cattle born and raised in Hyogo prefecture, only those Tajima-gyu which meet all the strict requirements set by the Kobe Beef Marketing and Distribution Promotion Association can claim the name “Kobe Beef.”

The secret of its delicious taste is so-called “marbling” with the condition that its fat, which melting point is so low to even melt with the warmth of human skin, is finely penetrating the muscles. 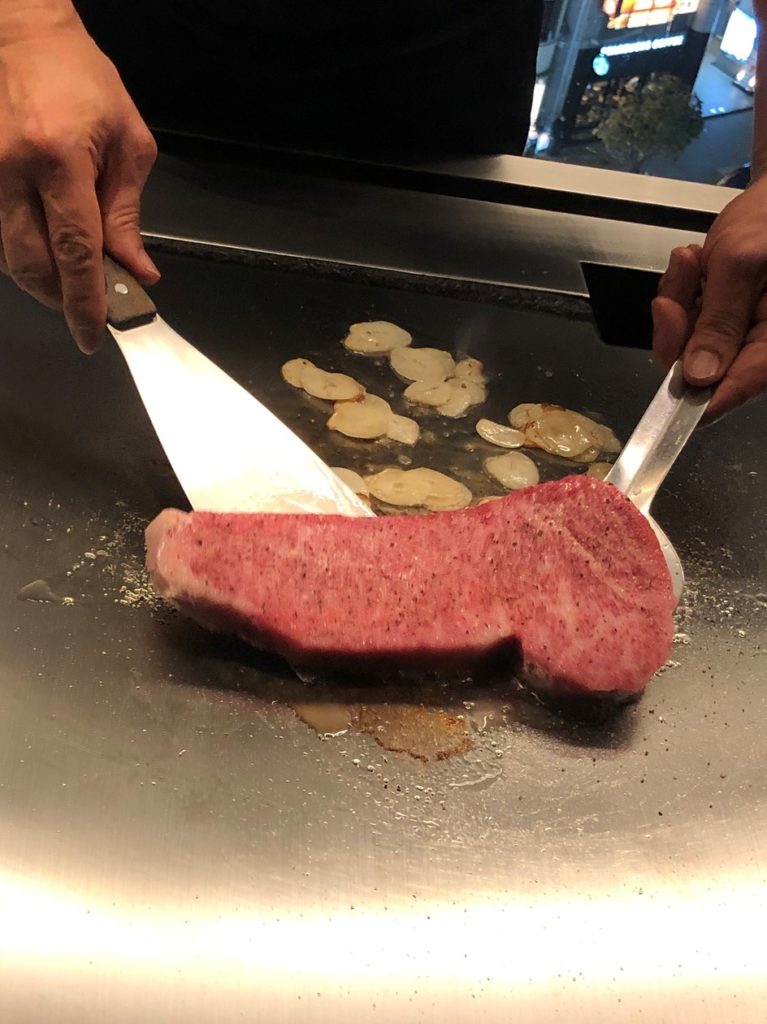 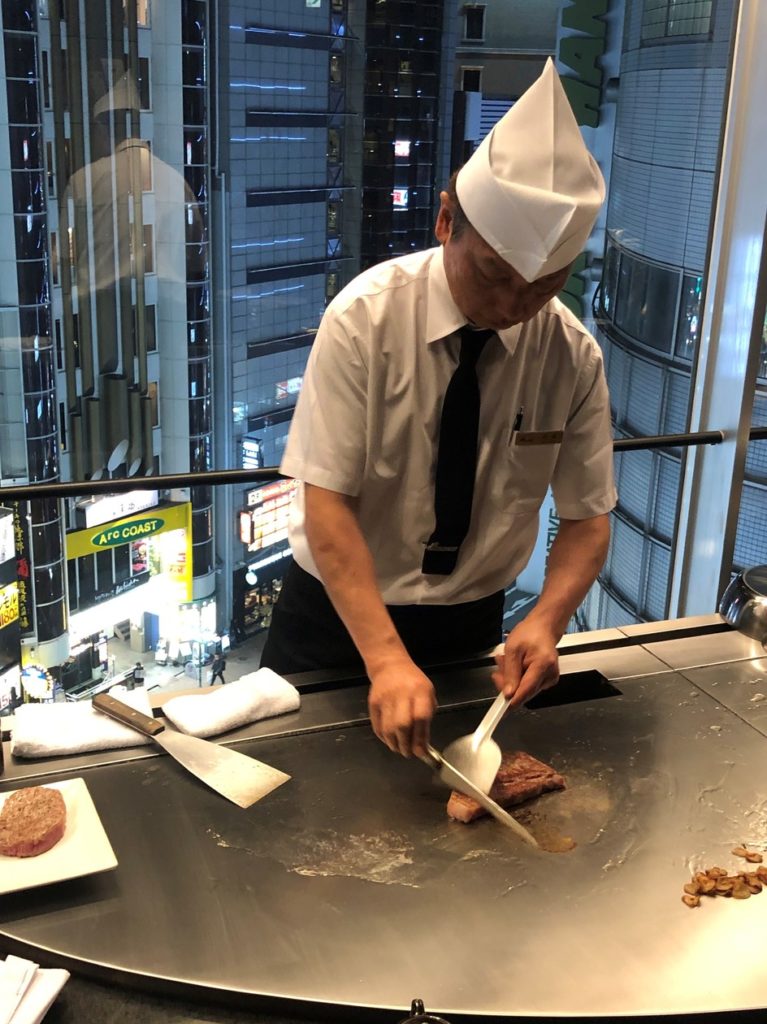 Straightaway, the chef stated grilling such Kobe beef. With the delicious sound of grilling the meat, aromatic garlic smell filled the place, and my appetite was more stimulated. At the same time, skilled techniques of the chef using the flat iron grabbed my attention unintentionally. 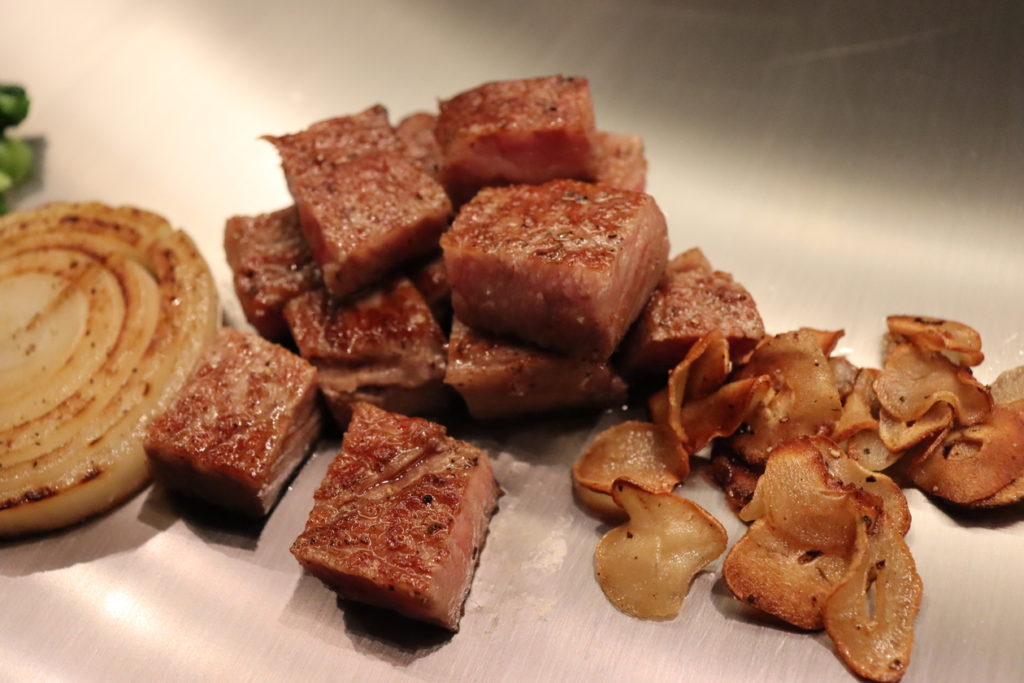 The fragrance of meat spreading out immediately after brought in to the mouth and tenderness of meat which melts in the mouth create the moment of bliss which you cannot enjoy in your everyday life. 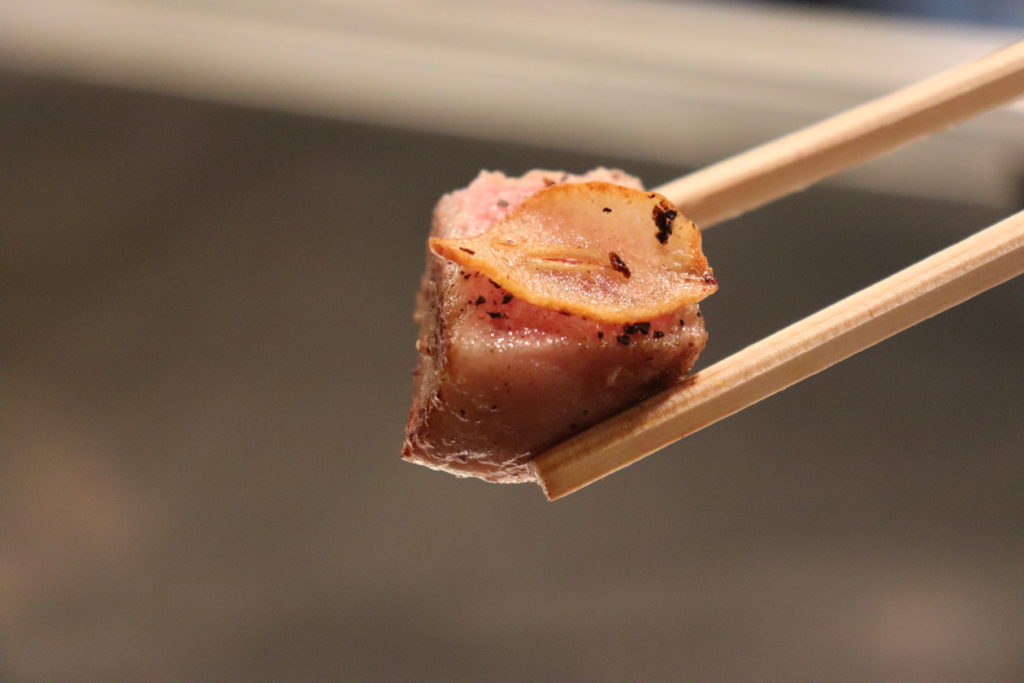 Not only meat, but also accompanied garlic is marvelous. Using the flat iron, it is grilled well to crisp and goes very well meat. 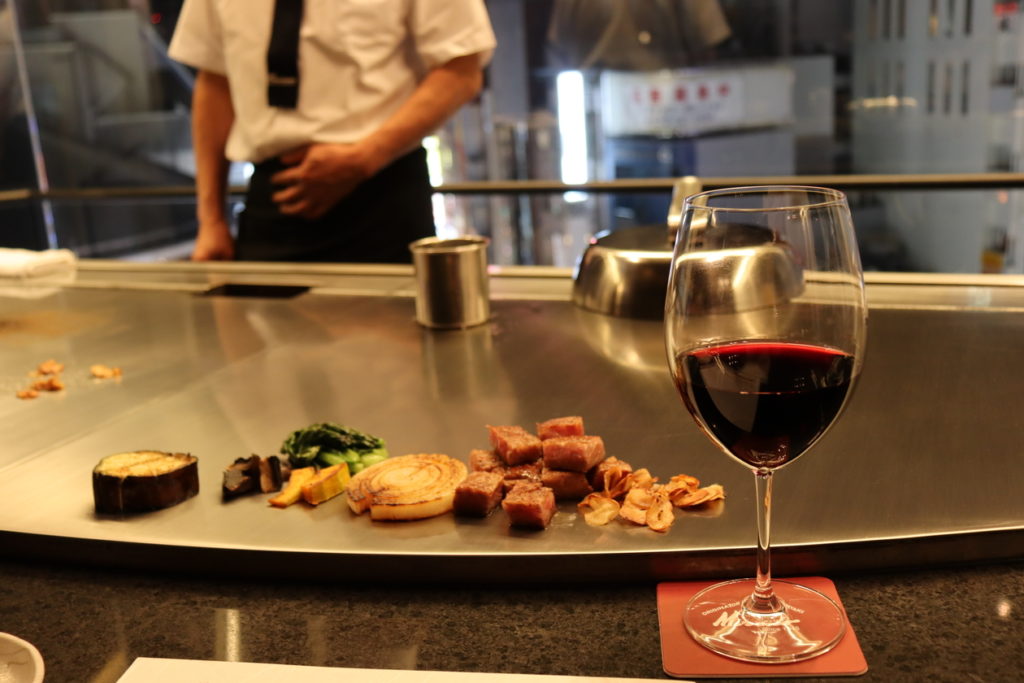 Also, umami of meat and bitterness of red wine match well, and you would be satisfied with its luxury taste. 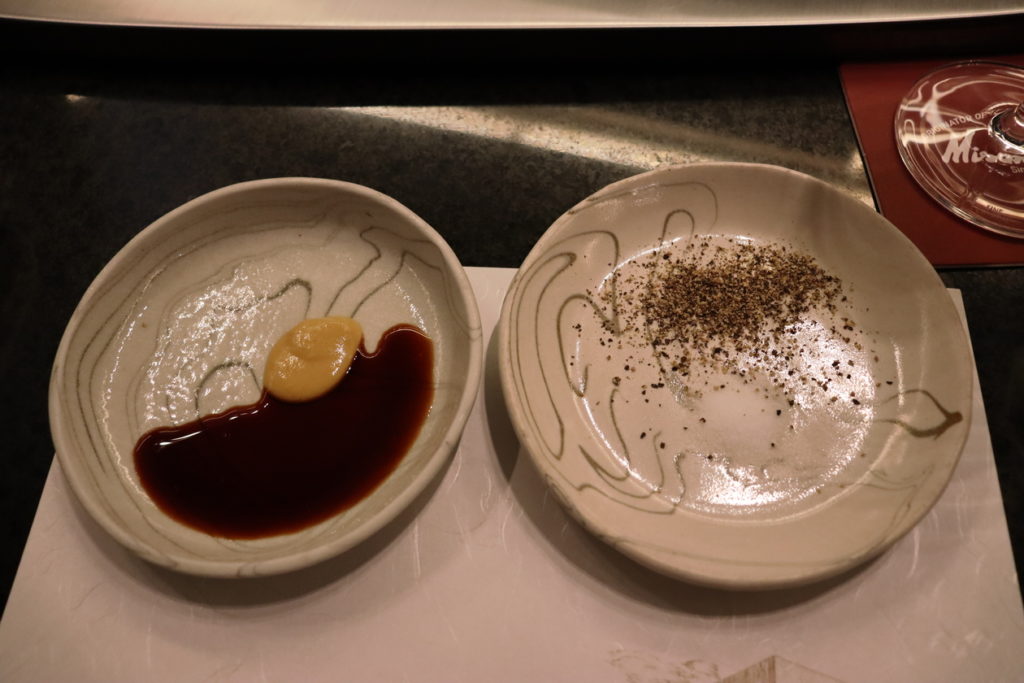 Continued is the garlic rice. 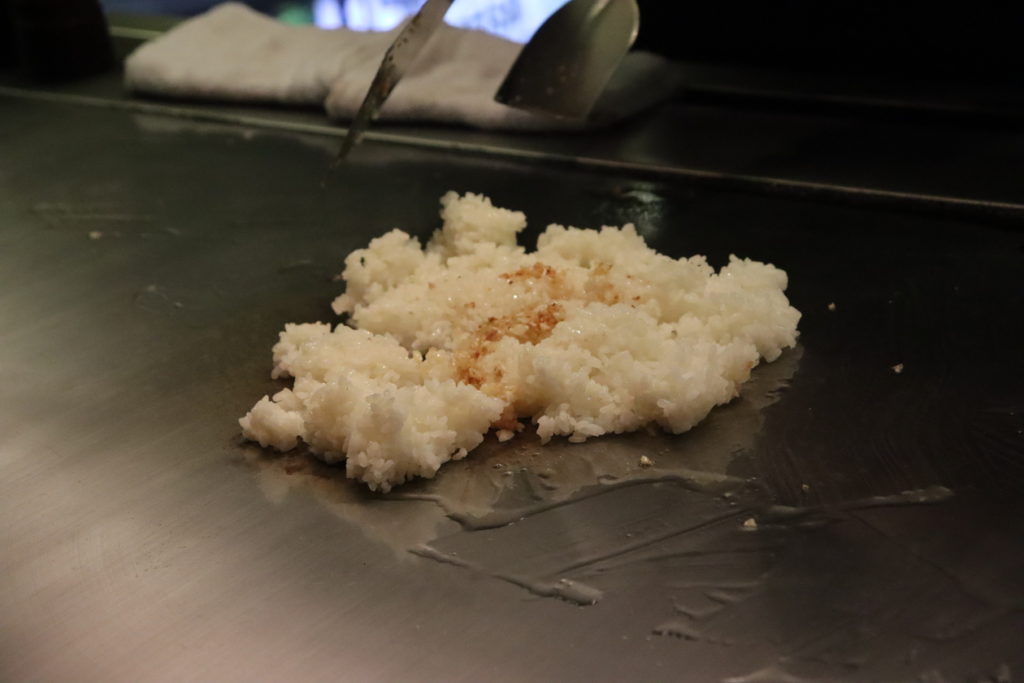 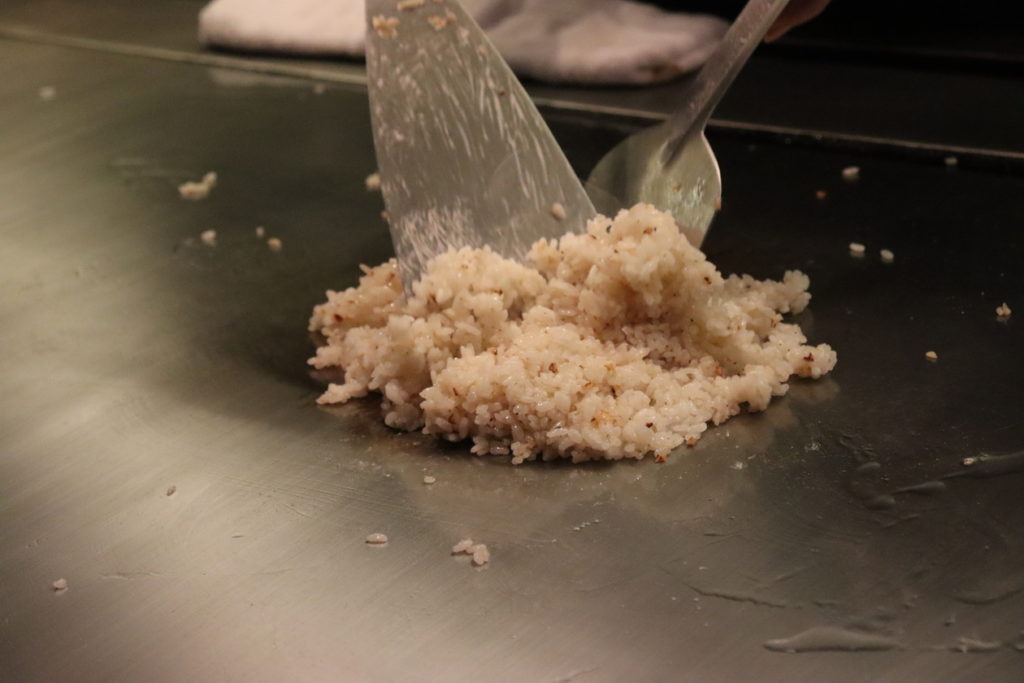 When eating teppanyaki, I always feel like eating this after meat. It is made with white rice, garlic, salt and pepper and fat came out from meat while grilling. According to the chef, to create the springy texture only with those ingredients, they do hundreds of steady practices. 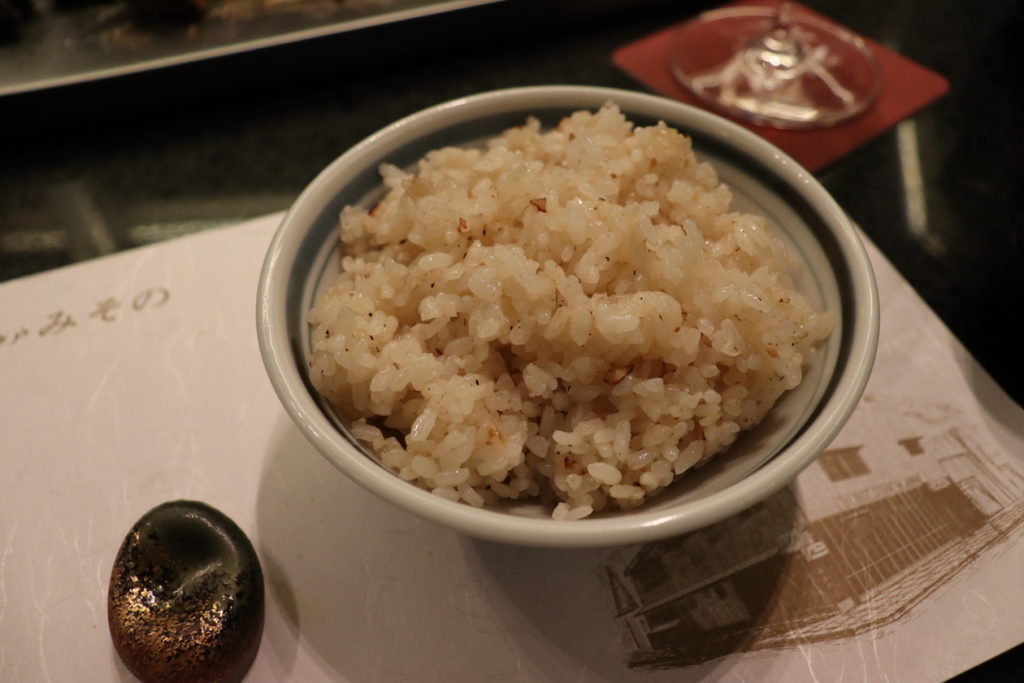 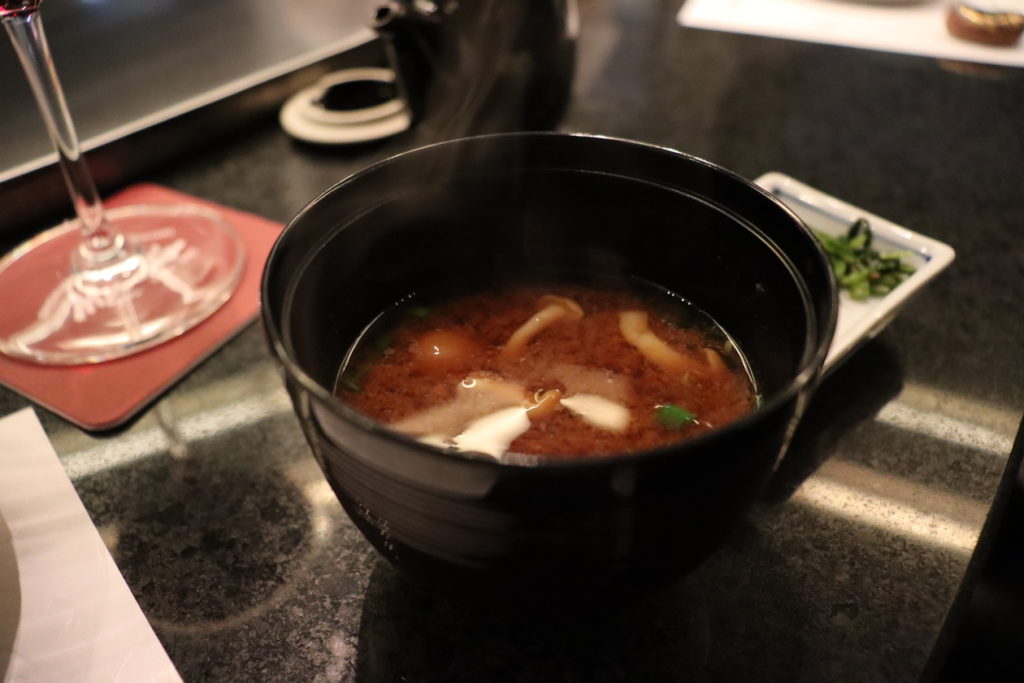 Eating together with miso soup and pickles.

This miso soup is made with miso paste in which black beans of Tamba is used. Garlic rice coated with meat fat was delicious with a nice feeling to the tongue and the teeth.

I also had their omelet which is favored by those so-called “gourmet.” 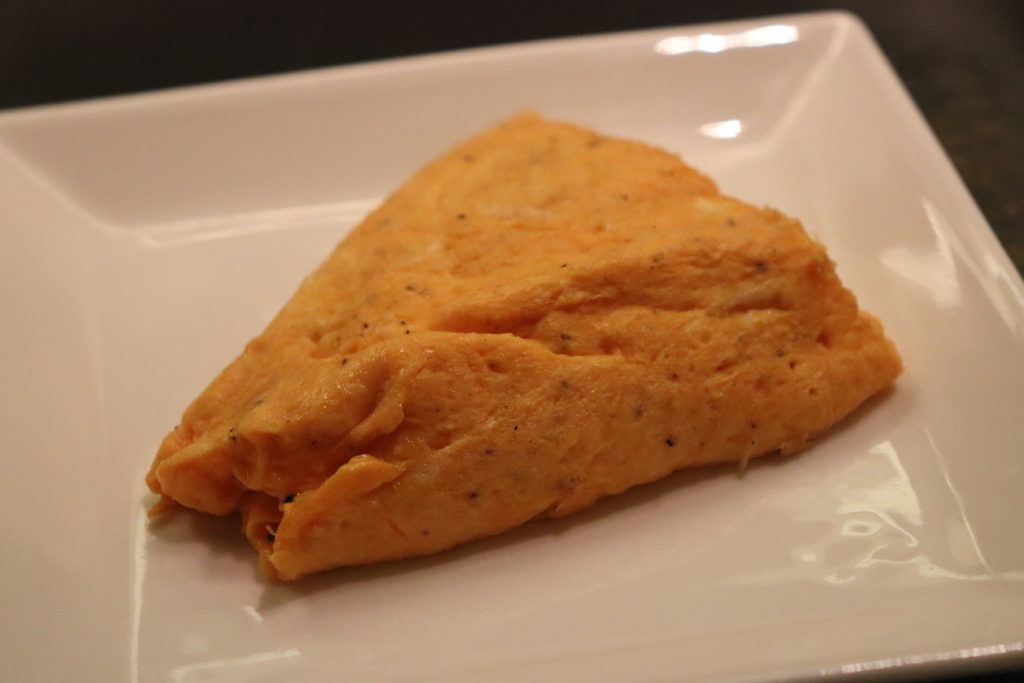 It was simple but deep in taste, and the original flavor of egg was condensed in it. For your information, it takes a long time until you manage to cook it in a beautiful shape. In other words, it is not an easy dish at all. It is an “elaborate dish” which requires many years of practice for a new cook before serving it to customers.

I had a dessert at the end. Gochiso-sama deshita! (Thank you!) 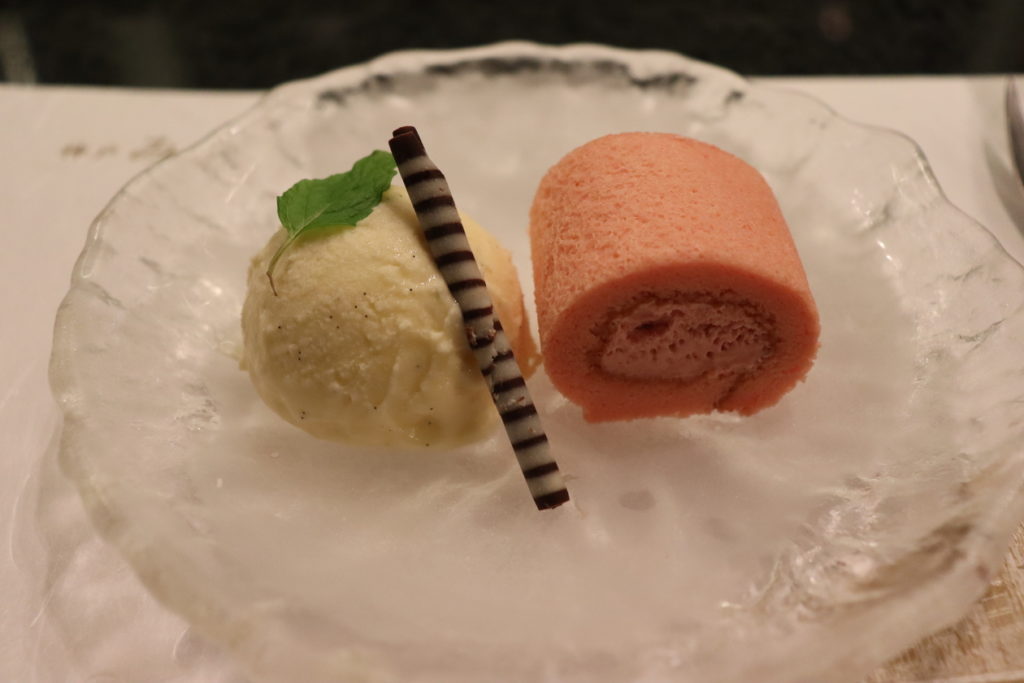 This is the chef and the manager of Kobe main shop, Mr. MOTOTANI, who cooked for me.

He loves cooking so that he makes dinner for his children and grandchildren every week when he is off. Just to mention that he is into the sport gym as well. 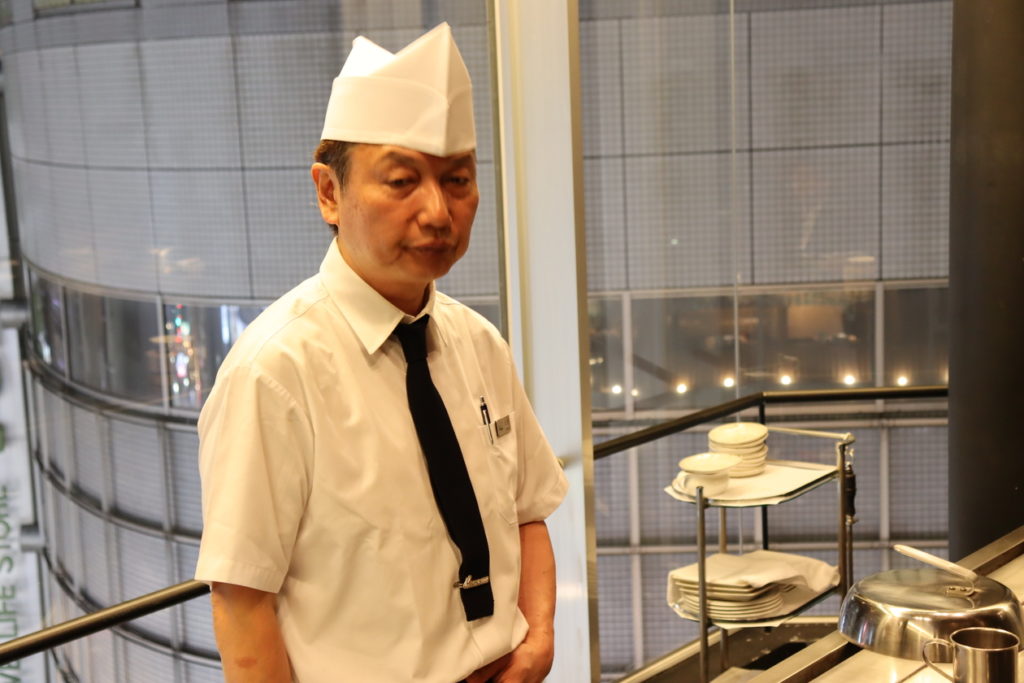 I had an interview with this experienced chef, Mr. MOTOTANI, working for MISONO restaurant for 33 years.

―What was the reason you started working for MISONO?

“I used to work for a French restaurant. But, my superior moved to MISONO Osaka shop. That was the reason. I thought I would naturally work for another French restaurant in near future, and so, till finding a next place of work, I just started working here as my spare job. But I have got fascinated with teppanyaki, and when I realized, it has been 33 years since then.”

―When is the moment you are so attracted by it?

“Well, there are so many moments. But probably the most is when I see happy faces of customers directly in front of me. While cooking inside the kitchen at French restaurant, I seldom had an opportunity to see the facial expression of customers and to hear their impression. However, for teppanyaki, they are just there in front of me. Of course I feel nervous, but at the same time, stimulation I get from their happy faces is twice as much as my tension, and it motivates me a lot.”

―Do you have many foreign customers?

“Before, this shop had only Japanese customers and we did not accept any interviews. Several years ago, we became more conscious of foreign customers and started working. As a result, the percentage of foreign customers has been overwhelmingly increasing. I guess, we were quicker than anybody else to deal with inbound tourists. I myself speak only Japanese, but, I am trying to make them happy, using simple explanation and gestures. We have some English speaking staff, and also, we have menus written in English, Chinese and Korean languages. I have seen some customers surprised with this face-to-face kitchen style, and some others shocked with delicious Kobe beef. To mention especially, since we respond to Halal requirements, a number of Muslim customers is increasing. I saw a customer crying because she was happy with our delicious food as well as our response to Muslims. I was so touched at that time, thinking that ‘our shop has become successful to make people from different parts of the world happy.”

―It would lead foreign tourists to make nice memories, wouldn’t it?

“If so, I would be happy. At our shop, we give foreign customers masu or a wood glass and a postcard as souvenirs. We would be happy if they recall the taste of MISONO after returning to their home countries.” 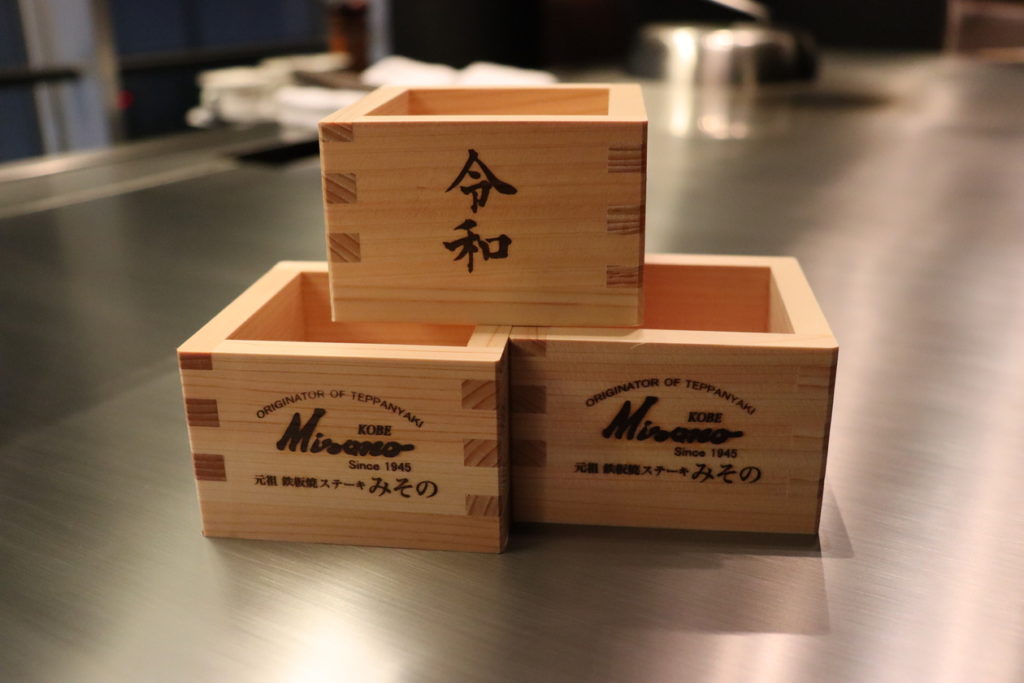 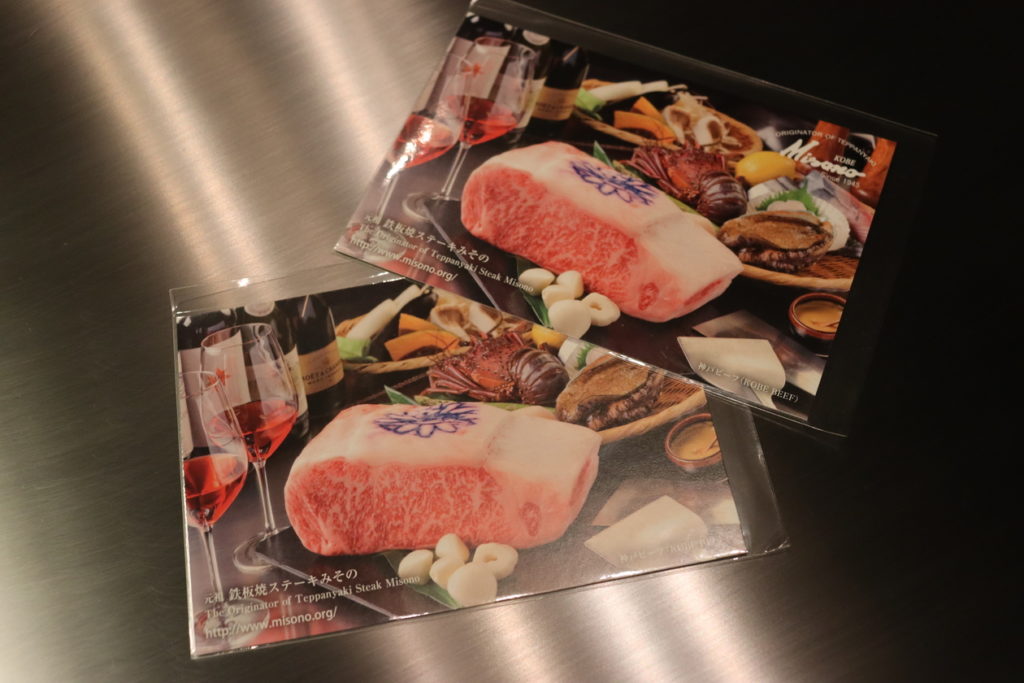 Not only food but also “staff” is attractive at Steak MISONO. I think I have understood the secret of the restaurant being loved by so many people. Their motto, “with minimum seasonings, the best taste and satisfaction for our customers” conveys intention of all the staff members.

Steak MISONO is the right place if you would like to eat Kobe beef or wagyu when visiting Japan. I have no doubt that, visiting here, you can make the best memory of Japan. Please do visit this restaurant once.

*The information herein is as of February 2020.

The Origin of Japanese Food is in Nara.

Haven’t you had ramen and finishing ozos……

Sushi you should not miss when visiting Osaka Dotonbori. Good value for money! 5 sushi restaurants serving a variety of sushi at Dotonbori.

[Kyoto] Gion is the best old red light district in Kyoto with beautiful townhouses and stone pavements. We will introduce six gourmet restaurants that you can spend in Gion!

A variety of seafood such as sushi, BBQ and sashimi is all packed here! 6 fine seafood restaurants you should not miss in Nara!